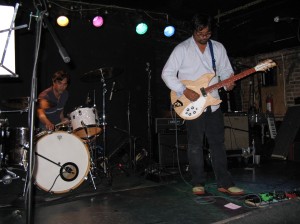 On June 18th +/- {Plus/Minus} kicked off their European tour with a show at New York’s Mercury Lounge along with bands Mascott, Gramercy Arms and Versus. When I first heard that Versus and +/- were performing, I had to go because as far as the American indie rock scene goes, they’re kind of a big deal. So big in fact that apparently neither rain nor the gig being on a Thursday night deterred fans from showing up either, because the house was packed! Fans literally came from all around. I met some guys at the sales table that drove in all the way from Rhode Island just to see the bands, caught them in Boston a few weeks ago and spent about $60 easily on vinyl…talk about devotion!

Versus is back…and apparently better than ever! Well correction – as Richard Baluyut shouted to the crowd, “We never left; we didn’t break up,” to which the crowd responded with a resounding roar of approval. Regular Versus band members Fontaine Toups and Filipino-American brothers Richard Baluyut and Edward Baluyut were joined on stage by Margaret White who lent her talents as backup vocalist, keyboardist and violinist for new songs such as, “Erstwhile, parts I and II.” Their set featured not only classic fan favorites but also some new songs as they announced that they have officially started recording their next album (which of course we will be reviewing). The band proved that despite a slight hiatus, they haven’t lost their touch to write great music. Their characteristic sound which starts off a bit sweet and melodic then switches to harder, head-banging, fist-pumping rock was still evident even in their new material. Fontaine’s soulful voice combined with Richard’s high energy is just pure genius. 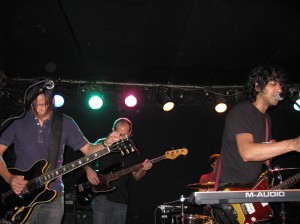 As soon as +/- {Plus/Minus} got on stage they wasted no time, diving right into their first song, “Queen of Detroit” and the house went crazy! As someone who has never seen them perform live, I must say they really know how to put on a show. Filipino-American band members James Baluyut and Patrick Ramos along with Chris Deaner pour their souls into every song they perform. The great thing about +/- {Plus/Minus} is their creativity, versatility and ability to blend electronic effects with not only traditional rock instruments but now even classical instruments as well. As promised on their website, there was a horn section complete with trumpets and French horns for a few songs like “The Hours You Keep” and “Subdued,” both of which are off of their latest album “Xs On Your Eyes” (released October 2008). Unfortunately this Jersey girl had to hoof it back and catch the last bus out of the city so apparently I missed an amazing ending. +/- {Plus/Minus} came back on stage to do a 2-song encore and according to one fan, “this was THE BEST show I’ve seen them play so far.”

Be sure to catch Versus this Friday, July 17th at the South Street Seaport Pier 17 and Fulton Street at 7pm. Not only is it free but it’s a guaranteed good time!

Much love and many thanks to Feliza Mirasol (who by the way is a huge Versus and +/- fan) for her contributions to this review.